Franz Marc was born in 1880, in the German town of Munich. His father, Wilhelm, was a professional landscape painter, and his mother Sophie was a strict Calvinist. In 1900, he began study at the Academy of Fine Arts, Munich, where his teachers would include Gabriel von Hackl and Wilhelm von Diez. In 1903 and 1907 he spent time in France, particularly in Paris, visiting the city's museums, and copying many of the images. In Paris, he frequented artistic circles which brought him into contact with a number of artists, including Sarah Bernhardt, and he discovered a strong affinity for the work of Vincent van Gogh.

In this period, Marc was involved in a number of stormy relationships, including a years-long affair with Annette von Eckardt, a married antiquary nine years his elder, and two marriages, first to Maria Franck, then to Marie Schnur. In 1906, he traveled with his brother, a Byzantinist by trade, to Saloniki, Mount Athos, and various other Greek locations.

Marc developed an important friendship with the artist August Macke in 1910. In 1911 he formed the Der Blaue Reiter artist circle with Macke, Wassily Kandinsky, and other artists who decided to split off from the Neue Kunstlervereinigung movement.

He showed several of his works in the first Der Blaue Reiter exhibition at the Thannhauser Galleries in Munich between December 1911 and January 1912. The exhibition was the apex of the German expressionist movement and also showed in Berlin, Koln, Hagen, and Frankfurt. In 1912, Marc also met Robert Delaunay, whose use of color and futurist method was a major influence on Marc's work. Marc became influenced by futurism and cubism, and his art became stark and abstract in nature.

His name was on a list of notable artists to be withdrawn from combat in World War I. Before the orders were carried out, he was struck in the head and killed instantly by a shell splinter during the Battle of Verdun (1916). 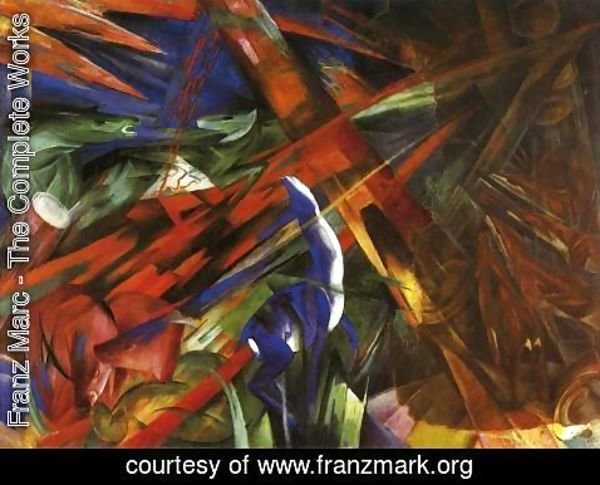 Marc made some sixty prints, in woodcut and lithography. Most of his mature work portrays animals, usually in natural settings. His work is characterized by bright primary color, an almost cubist portrayal of animals, stark simplicity and a profound sense of emotion, which garnered notice in influential circles even in his own time. Marc also gave an emotional meaning or purpose to the colors he used in his work, blue would be used for masculinity and spirituality, yellow represented feminine joy and red encased the sound of violence. Marc's work did not go unnoticed by the National Socialists; in 1936 and 1937, he was condemned by the Nazis as an "entarteter Kunstler" ("degenerate artist"), and approximately 130 of his works were stripped from German museums.

Franz Marc's best known painting is probably Tierschicksale (also known as Animal Destinies or Fate of the Animals), which hangs in the Kunstmuseum Basel. Marc completed the work in 1913, when "the tension of impending cataclysm had pervaded society", as one art historian noted. On the rear of the canvas, Marc wrote, "Und Alles Sein ist flammend Leid" ("And all being is flaming agony"). Conscripted during World War I, Marc wrote to his wife of the painting, it "is like a premonition of this war:horrible and shattering. I can hardly conceive that I painted it."

In October 1998, several of Marc's paintings garnered record prices at Christie's art auction house in London, including Rote Rehe I (Red Deer I), which sold for $3.30m. This record was exceeded in October 1999, when Der Wasserfall (The Waterfall) was sold by Sotheby's in London to a private collector for $5.06m. This price set a record for both Franz Marc's work, and 20th century German painting. (From Wikipedia)